Discover the best of Latin America

Save and Discover Salar de Uyuni 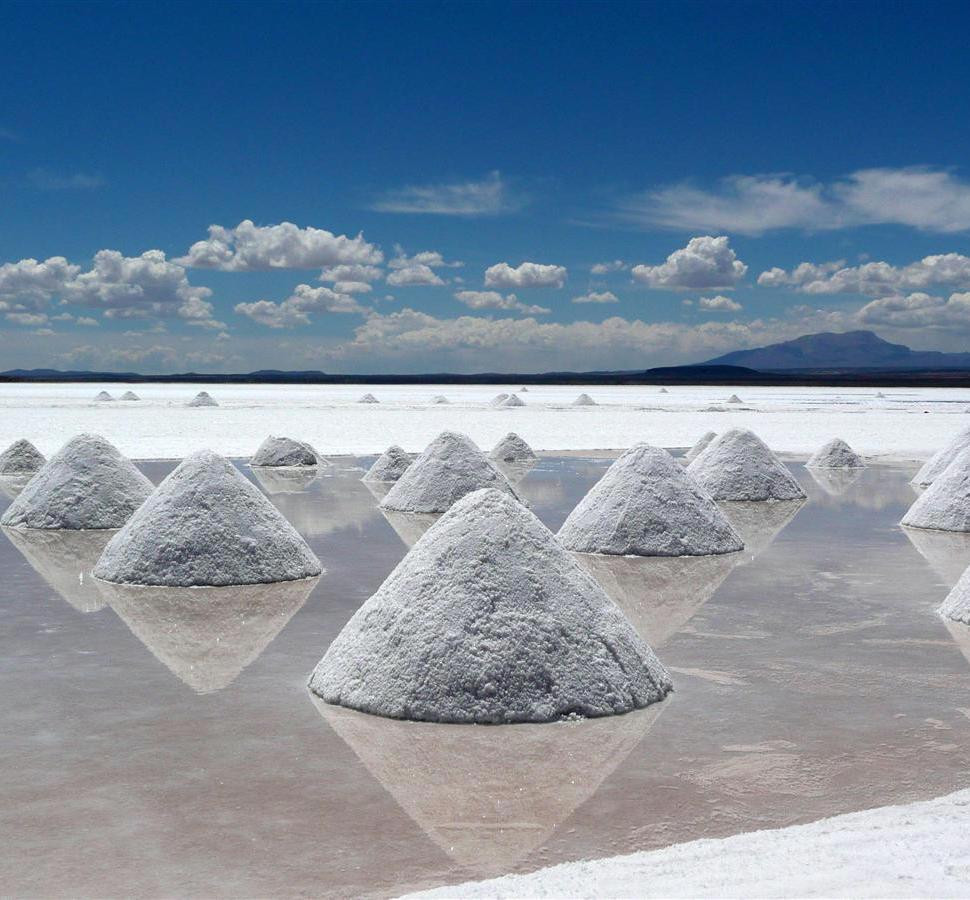 The Salar de Uyuni in Bolivia is the largest and highest salt flat in the world, and also one of the most incredible landscapes that exist, with an area of ​​10 582 km². It is located at 3650 meters above sea level in the southwest of Bolivia, within the highland region of the Andes mountain range. Complementarily there are rock formations, volcanic wells and spectacular geysers, which trace the visitor back to the time of the formation of the earth.

Comparable to an endless white sea when it dries and a colossal reflecting mirror when wet, the Salar de Uyuni seems to be almost otherworldly and will undoubtedly provide privileged visitors with spectacular photos and unforgettable memories.

Save and Discover Lago Titicaca 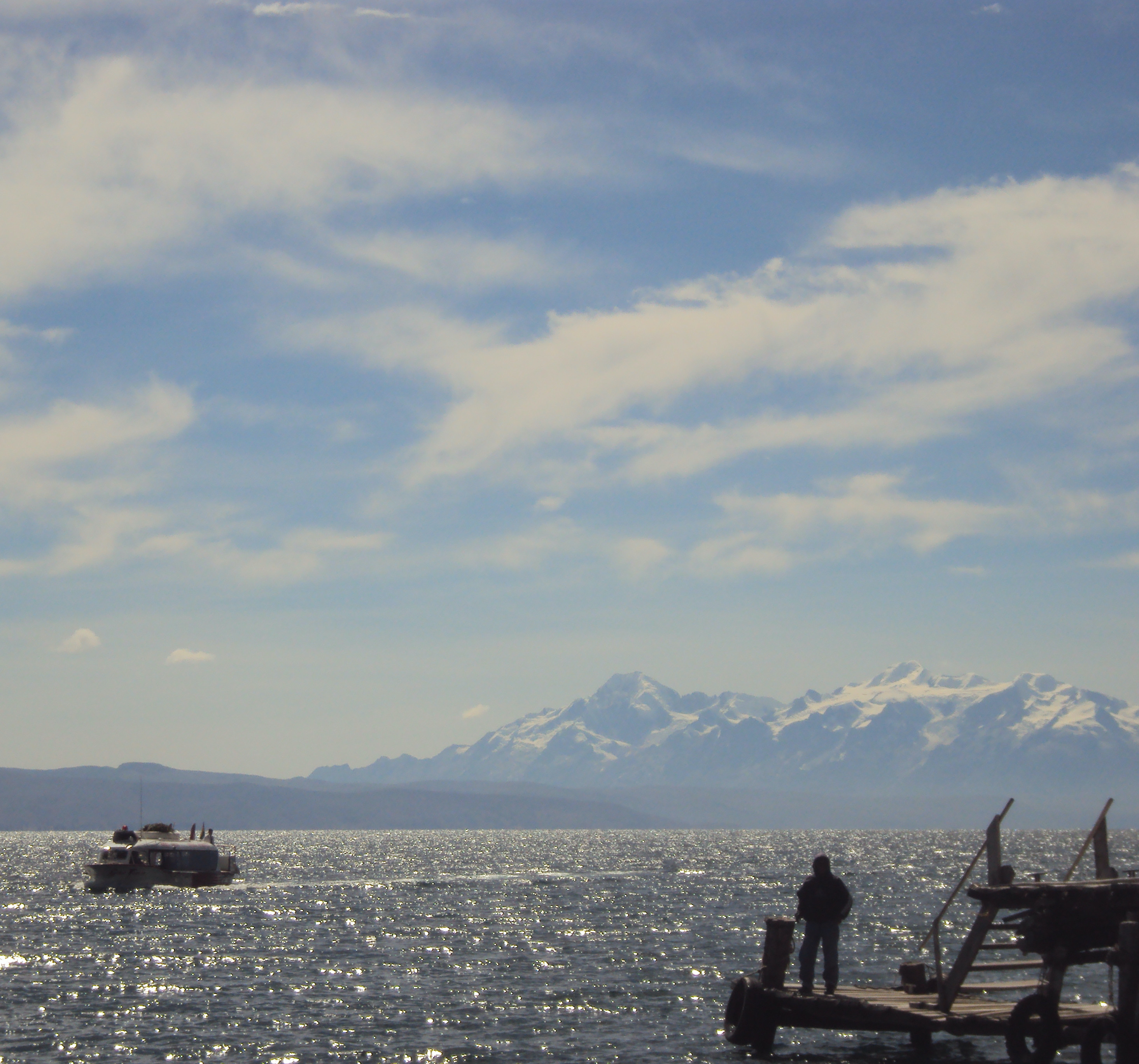 Lake Titicaca is also called the "Sacred Lake" due to the great importance it had for ancient cultures such as Tiwanaku and Inca. It is the second largest lake in South America and the highest navigable lake in the world, its more than 8 thousand square kilometers are shared by Bolivia and Peru; In the Bolivian sector there is the largest island in the same: Isla del Sol and many other islands with a charm that will leave you amazed.

It is said to be the cradle of the Incas and has several ruins. Its waters are known to be calm and give a brilliant reflection. In its surroundings, the Titicaca National Reserve is located, which houses rare aquatic species, such as giant frogs.

Save and Discover Sajama National Park 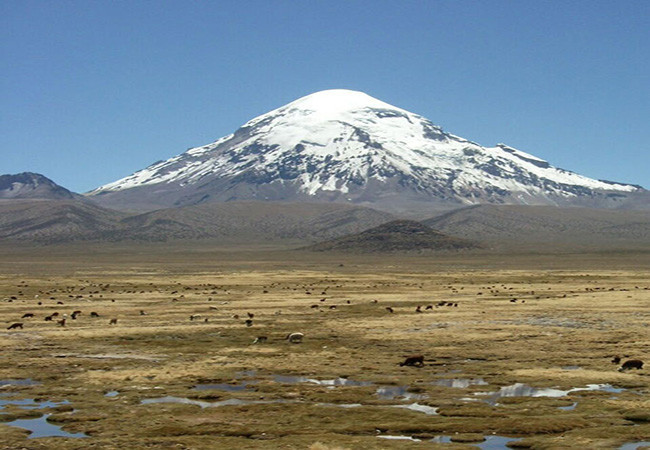 The Sajama National Park , one of the most important tourist destinations in Bolivia, is located in the Western Cordillera of the Andes and is the first Protected Area in the country. It is located in the province of Sajama and is the space dedicated to the conservation of high Andean ecosystems.

In the set, as natural attraction stands out the Nevado Sajama, inactive volcano, whose altitude is 6542 meters above sea level, which is one of the most coveted routes by the climbers, around which extend extensive forests and meadows where observe wildlife of the area. There are also the snow-capped Payachatas, queñuas forest, the Huayñakota Lagoon, the Juchusuma Sajama geyser chain in boiling waters.

Save and Discover Tiwanaku 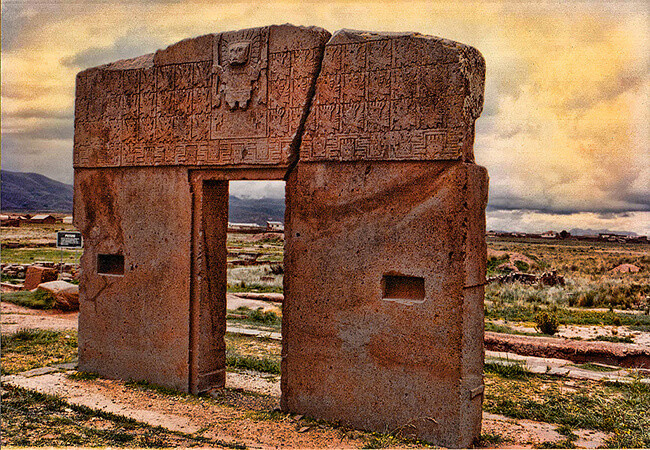 Tiwanaku It is an archaeological site that awakens the passions of all those who visit it, from professionals who perform detailed works to the general public. It is a place of immense cultural wealth of almost 2,500 years, it is inevitable to feel the energies that transmit its monuments and monoliths because there occurred very important events. Its inhabitants left traces, left messages through their symbols, let see their artistic ability through their sculptures, their ceramics, their weavings.

The archaeological complex is located in the Bolivian altiplano. Its climate is arid-cold, which allows sudden changes of temperature throughout the day. This fluctuates between 15 and 20 ° C.

Save and Discover Rurrenabaque

Rurrenabaque is a small city in northern Bolivia, located in the Department of Beni and the entrance to the fascinating world of the jungle. The city has a tropical climate, and is the starting point of several excursions that allow to know the flora and fauna of the area. The city has many hostels and travel agencies

The main attractions are the jungle and walks through it. Tours to the jungle, can be on foot and by boat. These tours are for travelers interested in observing wildlife, including crocodiles, anacondas, pink dolphins, monkeys, giant anteaters, and many others. There are also many species of birds and butterflies. Eco-tourism in particular attracts lots of tourists

Save and Discover Yungas 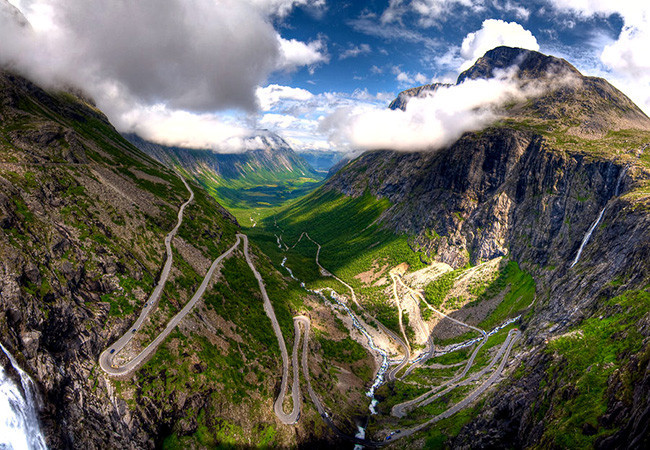 The Yungas are tropical and humid valleys with high mountains covered with dense vegetation and fast flowing rivers that offer the possibility of enjoying a unique and cozy natural environment amid tropical vegetation and climate. Congregates social groups of different origins as Aymara, Afro-Bolivian and mestizo.

The vegetation is varied and abundant, with large plantations of coffee, coca and citrus. Wide variety of birds (parrots, pigeons, partridges, uchis) and mammals (mountain pig, monkeys, deer) etc. The town of Coroico is the most visited tourist place in the Yungas. Its main attractions are: waterfalls, Calvary, Cerro Uchumachi, Coroico River and patronal festivities.

Save and Discover Chacaltaya 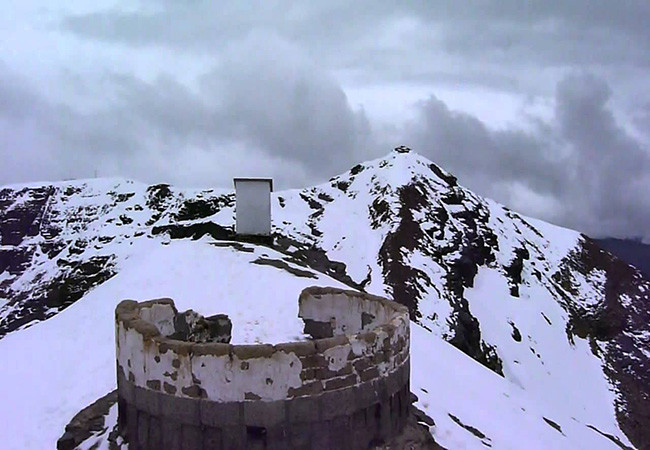 Chacaltaya is a mountain in the Cordillera Real, one of the mountain ranges of the Cordillera Oriental, itself a range of the Bolivian Andes. Its elevation is 5,421 meters .

Chacaltaya's glacier , which was as old as 18,000 years, had an area of 0.22 km² in 1940, which had been reduced to 0.01 km² in 2007 and was completely gone by 2009. Half of the meltdown, as measured by volume, took place before 1980. The final meltdown after 1980, due to missing precipitation and the warm phase of El Niño, resulted in the glacier's disappearance in 2009.The glacier was one of the highest in South America, located about 30 kilometers from La Paz, near the Huayna Potosí mountain.

Save and Discover La Paz City 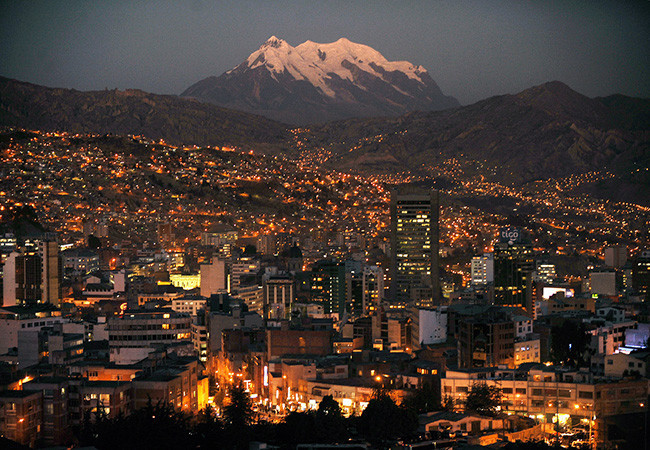 While Sucre is the legitimate capital of Bolivia, La Paz is the administrative capital and the city that every visitor uses as a base to explore the rest of the nation. At more than 3,500 masl, La Paz is located inside a huge valley that will leave you with your mouth open when you contemplate the enormous size of the city.

In the first instance, one will think that you will only find mountains in Bolivia and nothing else, but what abounds is an enormous geographic and climatic diversity. Among Amazon jungles, colorful lakes, colonial cities, indigenous peoples and snowy mountainous landscapes of great beauty, it is difficult not to be surprised with so much natural variety.

Save and Discover DEATH ROAD 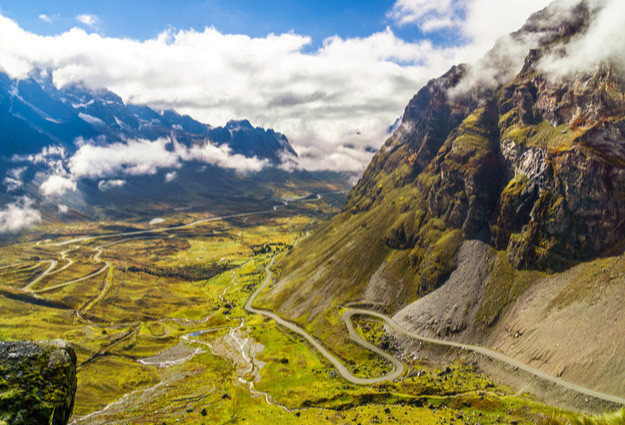 The road links two very different Bolivias, the high plateau of La Paz, a land of winds and steep mountain peaks with the region of the Yungas, with a temperate and subtropical climate.

Save and Discover Potosi City 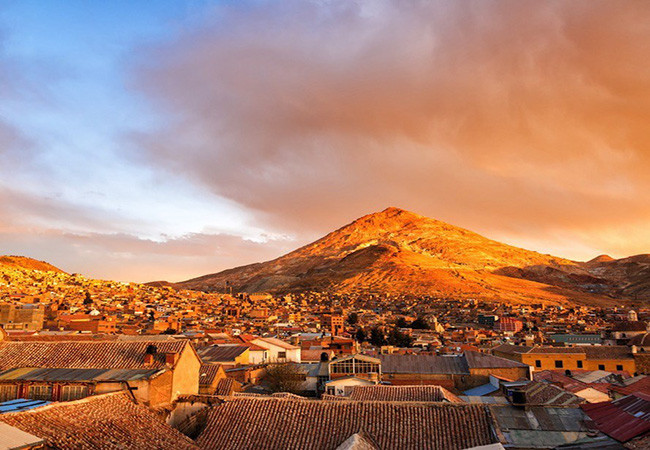 Potosi City is located at the foot of Cerro Rico, its history is closely linked to silver. In 1650, Potosí was the most populated city in the world because the Cerro Rico de Potosí housed the most coveted silver veins in the world. Potosí was declared a Cultural Heritage of Humanity by UNESCO.

This city remains intact, not only in its architecture, but also in what the presence of the original cultures means; In its landscape stands out the imposing Cerro Rico in combination with the set of buildings, churches and towers with characteristic covers of the colonial era such as: the Potosí Cathedral, in Gothic style; the Casa de la Moneda, the Tomás Frías University. 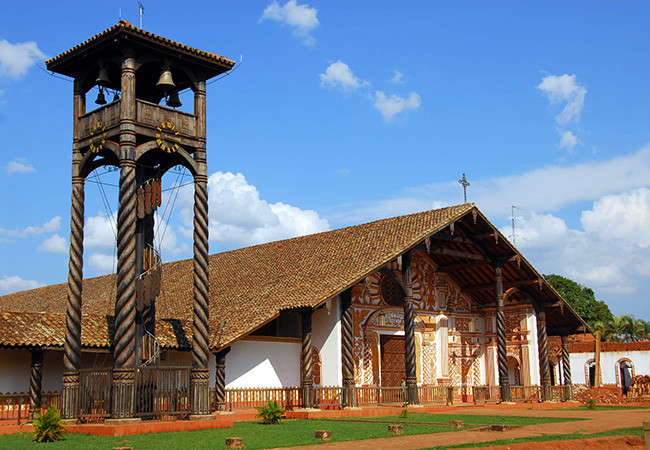 San José de Chiquitos is best known as one of the Jesuit Missions of the Chiquitos, which is declared in 1990 a World Heritage Site,as a former Jesuit Reduction. It lies at the junction of important roads: the one of Santa Cruz to Puerto Quijarro and the one to the missions north. San José is close to two important nature sites: Santa Cruz la Vieja historical park and the vast Kaa-Iya national park.

Between 1696 and 1760, six ensembles of reducciones (settlements of Christianized Indians) inspired by the ‘ideal cities’ of the 16th-century philosophers were founded by the Jesuits in a style that married Catholic architecture with local traditions. The climate is tropical.

Save and Discover Sorata 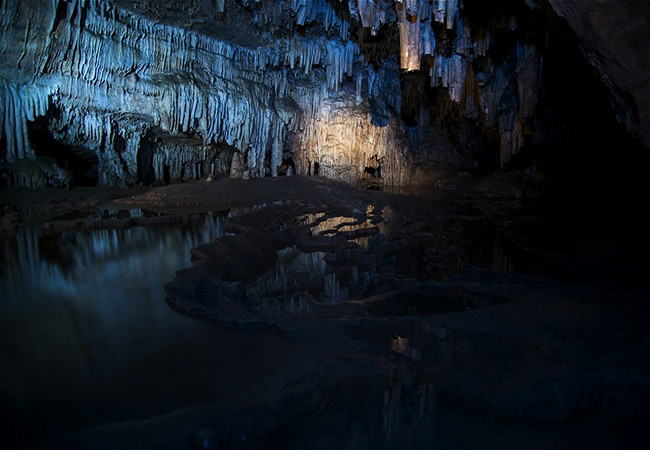 Sorata is a small town in the La Paz Department in the Bolivian Andes. It is a somewhat popular weekend getaway and a relaxing base camp for a growing number of hikers. It includes several small hotels, including a converted Italian mansion. In colonial days, Sorata provided a link to the Alto Beni goldfields and rubber plantations, and a gateway to the Amazon Basin.

Being in Sorata is very relaxing, since it is surrounded by a lot of nature, and has many places of interest for the visitor, one of the most visited and popular attractions is the Grotto of San Pedro, it is an immense cavern located about 10 Kilometers away. the population is about 30 minutes from the main square.

Save and Discover Sucre City 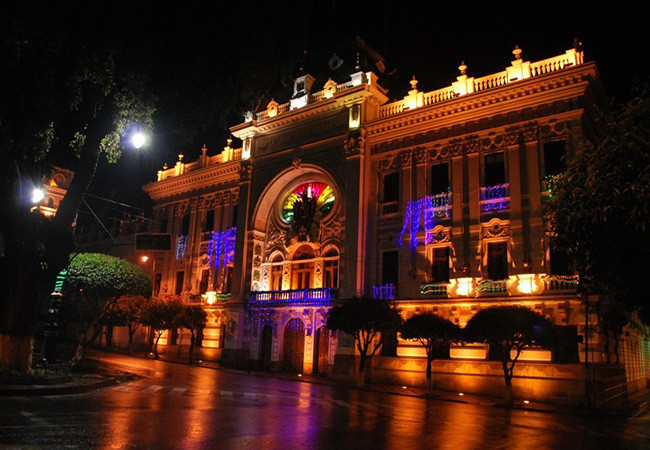 Sucre City, the first capital of Bolivia,is an excellent, intact and well-preserved illustration of the architectural blending achieved in Latin America through the assimilation of local traditions and styles imported from Europe. Sucre has a subtropical highland climate with mild temperatures year round.

Sucre is a city-museum and also an art gallery; but at night you will be able to please him for his cultural-educational concerts as well as for music; the different and diverse bars and restaurants, which enjoy a European atmosphere.Everything begins in the Plaza 25 de Mayo, around and in its vicinity there are university academic units, theaters, museums, houses of culture.

Save and Discover Toro Toro 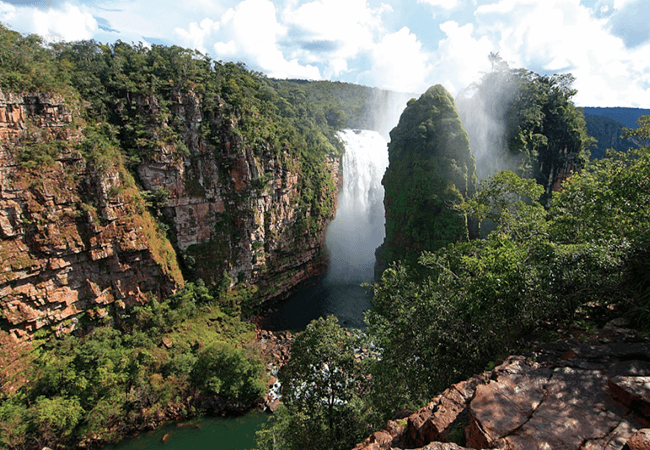 Toro Toro National Park is located north of the department of Potosí, the starting point and entry must be made from the city of Cochabamba. It has a temperate climate. The region is typically mountainous with deep canyons, valleys and waterfalls. Of exuberant beauty.

TotoToro shows the vestiges of history and its extraordinary natural wealth, being an ideal place to carry out paleontological, archeological and cultural research due to its richness in fossils, dinosaur footprints and remains. According to the investigations, in the ToroToro National Park there are around 2,000 footprints of dinosaurs, among them the sauropods, anquilosaurs, theropods and dromaeosaurs. 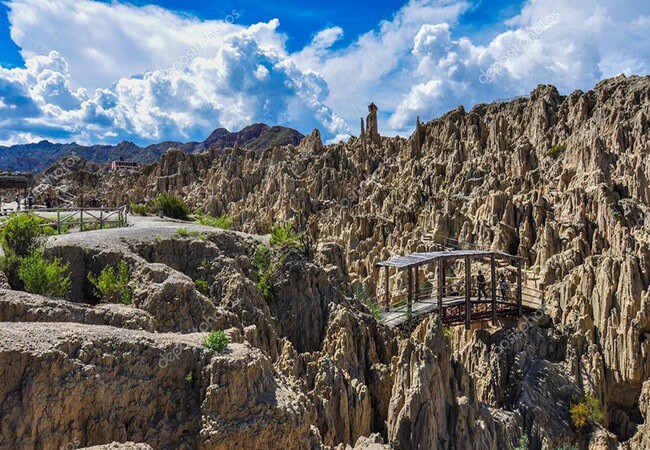 Valley de la Luna (Moon Valley), is a maze of canyons and giant spiers. The formations, composed mainly of clay and sandstone, were created by the persistent erosion of the mountains by the strong winds and rains of the area. Is located 10 kilometers from the center of La Paz, it is a unique area with lunar landscapes and strange geological formations.

One of the most impressive features of Valley of the Moon is its varied pallet, from light beige tones to sections of red and dark purple. This natural phenomenon is due to the great variation in the mineral content between each individual mountain, creating colorful compositions and impressive optical illusions on the eroded hillsides. 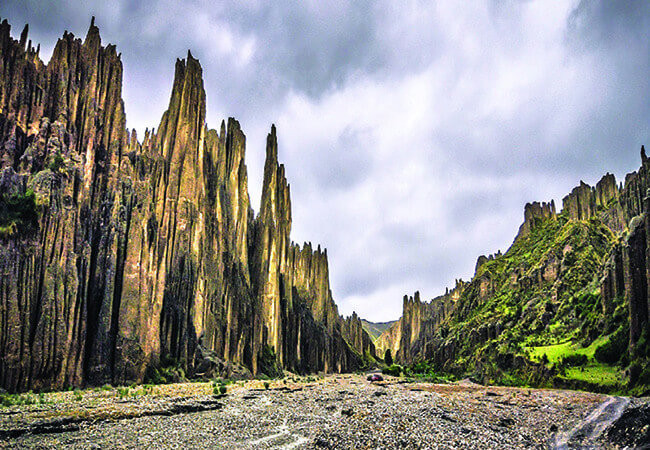 The Valle de las Animas, or Valley of the Souls is a densely packed forest of rock formations, each stabbing toward the sky in great clusters. Formed out of mudrock and erosion over hundreds of years, the visually-stunning valley has drawn in visitors for thousands of years.

When the first people visited the valley, they believed the spires resembled petrified souls, and gave the area its name. Valle de las Ánimas offers tourists a temperate climate, mystical landscapes and a privileged view of Illimani and Mururata. These rock formations are the result of the melting of a glacier, millions of years ago, it is one of the main attractions of the government headquarters.

Save and Discover Oruro

Situated at dizzying heights in the arid Altiplano region of Bolivia is a mining town home to one of the most famous festivals in all of South America. Each year on the Saturday before Ash Wednesday, the usually sleepy Oruro comes alive, hosting the world renowned Carnival.
Oruro in 360